Showing posts from May, 2013
Show all

Saving Open Data in the Town of Cary

- May 29, 2013
The Town of Cary needs your help 0$ are in the Cary 2014 budget for Technology. This means no money to continue the Open Data efforts in Cary (or to fix the Town website usability issues, develop mobile apps, roll out customer engagement platforms, etc.). The budget will be approved on June 27. The Background Town Council will respond to requests from the citizens. The former Technology Task Force members are the only ones contacting our council and this is not enough to sway their priorities. Please take a minute to compose an e-mail to the council about what areas of Technology you feel the Town should be investing in this coming year. mailto: council@townofcary.org The Town of Cary convened a 9 member commission to look at how the Town is and should be using Technology to interface with its citizens. In Fall 2012, the Technology Task Force (TTF) took a deep dive into many areas and came up with 71 recommendations for the Town We met for over 160 hours and developed a report that n
Post a Comment
Read more

Morrisville Open Data Discussion On May 28 by  Ian Henshaw Press Release Published on 5/23/2013 Councilman Rao To Discuss Support Of Initiatives And Their Goals At Town Hall MORRISVILLE, N.C. – Steve Rao, ( http://steverao.com/ ), an at-large member of the Morrisville Town Council, has announced that he will lead a discussion on the Smarter Cities and Open Data Initiatives on Tuesday, May 28 from 6:30 to 10 p.m. at the Morrisville Town Hall, located at 100 Town Hall Drive. Rao intends for Morrisville to join a growing list of Wake County cities, most notably Cary and Raleigh, in supporting the White House’s Open Data Initiatives project. Open Data Initiatives work to accelerate and expand efforts to make government information resources more publicly accessible in “computer-readable” form and spurring the use of those data by entrepreneurs as fuel for the creation of new products, services and jobs. Innovative tools including the Weather Channel and GPS systems have all resulted from
Post a Comment
Read more

What is the White House Open Data Policy?  Recently there has been a lot of buzz around the release of the White House’s new  Open Data Policy released in  Memorandum M-13-13 . For those of you that may not have read the memorandum in its entirety it directs federal agencies to make all data open and machine readable by default. Obviously there are caveats to that. Agencies can redact data that does not meet disclosure standards regarding security and privacy. The excitement centers around the language of “open by default”. The Real Impact of “Open by Default” What impact does this have on open data initiatives at the municipal level and more directly, how does this affect Open Raleigh? Some immediate impacts are listed below: M-13-13 creates a new standard for governments to emulate. “Open by default” is a completely different paradigm in regards to an enterprise data strategy. All enterprise applications at the White House level will now have to make machine readable open data as p
Post a Comment
Read more 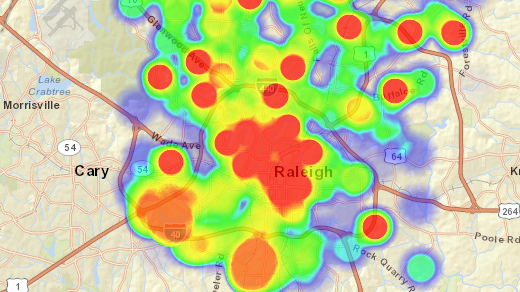 Above is a heat map of geospatial data from the City of Raleigh's Open Data Portal This is a reuse of a great post on http://www.opensource.com by  +Jason Hibbets . See the Creative Commons attribute at the end of this post. Open Raleigh One of the keys to a successful open data portal is to make it useful for the end user. Citizens and developers should be able to understand data sets without needing a PhD. Many folks have followed the progress of Raleigh, North Carolina's open data initiative, which  launched  a beta of their  data.raleighnc.gov  portal in March 2013. One of the most important parts of Raleigh's open data initiative is that it's not just about the data. The city staff working on the data policy and the open data portal have a full and complete understanding that presenting raw data sets only gets you halfway to your open data mission. Without visualization tools or a way for the average person to understand what the data means, the job is only half
Post a Comment
Read more
More posts